Well, it took me a year, but I finally finished it. Yes, you heard that right – a whole year. Whoever decided that inventing Deco Mesh was a good idea is a mean, mean person and is laughing all the way to the bank.
It was about this time last year when I was looking for a project to keep my mind and my heart busy. I was having such a hard time with my father’s passing and it was quite easy to buy things to start projects yet the actual doing of anything, let alone finishing anything wasn’t happening.
I can only give myself a free pass for so long.
So there it was, bags and piles of pink Deco Mesh, mocking me. Stupid Deco Mesh. Bring it on.
I put my big girl panties on, rolled up my sleeves, called in some reinforcements and got it done. I’m not gonna lie, I really do love it. It reminds me of a 90’s spiral perm on crack. I watched a bazillion videos and it took forever and it was a pain in the keister. I’ll tell you this though…If you want to strain your marriage a bit…leave piles Deco Mesh around for 2 weeks. That will do the trick. It is guaranteed to piss off just about the kindest of husbands.

There are a couple of things I learned from this project:
1. I can ask for help:
Man. I think this will always be hard for me. I’m horrible at asking for help, I feel people judge me as being weak. But strangely I am honored when people ask me to help them. It is so odd. But working on this project with a friend was tons of fun. She kept me focused and we bounced ideas off of each other. AND THEN when Darren started getting frustrated that his dining room table was MIA, he started helping too. Don’t tell him, but it was fun throwing Deco Mesh at each other.

Thanks for helping Babe

2. Just because I can – doesn’t mean I should:
Every.Stinkin’.Time. You’d think I’d learn. Just because I CAN do something myself, doesn’t mean I should. Yes, I CAN change my own tire, in sub-freezing temperatures, in the middle of the night, with 3 screaming kiddos in the car, on the side of the highway. Should I? No. No I shouldn’t. I should just call the triple-a. That’s what it’s for. Same goes for Deco Mesh. That’s why God invented Etsy.
3. It isn’t always pretty when you get close, I mean really close:
Seriously. Don’t look too closely at this wreath. It looks fabulous from far away (just like me). But then the closer you get, the more you see of all the frays and imperfections. And boy-oh-boy does this thing have imperfections (just like me).
4. But….I have developed a love/hate relationship with Deco Mesh:
Dude. Not 2 minutes after I finished saying ‘I never want to see Deco Mesh ever again’ was I scrolling the Craft Store sale ad and saw that Deco Mesh was on sale *Yahtzee* I started envisioning a beautiful St. Patrick’s Day wreath. I need to go to the Craft Store, don’t I? Ugh. There is something seriously wrong with me. Don’t tell Darren. 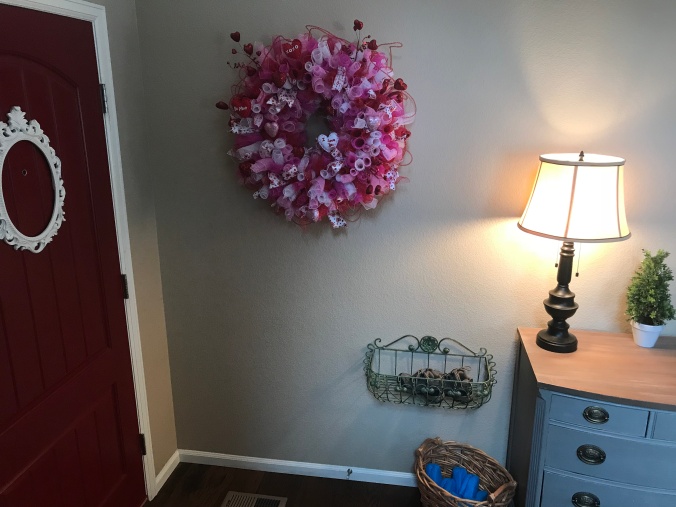 I’ve noticed that learning a foreign language isn’t a high school requirement over here. Interesting since many colleges do require two years of foreign language credit, but I’ll save that rant for a different day. I normally don’t like to do ‘shoulda’s’ but if I could do it all over again, I would have picked Latin instead of French. I know, I know…’But Sar, Latin is a dead language’. Oh, I hear you. But I really think it helps with all the Romance languages – Italian, Spanish, French (what are the other 4 romance languages, I always forget…)

Although English is not one of the romance languages, I’d like to believe that learning Latin would have helped me along the way.

Long long time ago, I saw a sign in my doctor’s office that mentioned a new service they were offering ‘Complementary Medicine’.

Little did I know that after an afternoon of guided imagery, aromatherapy, shiatsu, and acupuncture I would still be getting a bill. There was nothing complimentary about it.
Turns out it wasn’t Latin I needed to learn, I was just a dumb ass and didn’t know the difference between complementary and complimentary.

Well, at least learning Latin will help me with my spells at Hogwarts. Expecto Patronum!

Maybe I can turn learning Latin into a spellcasting type thing around here. Think anyone will change out the laundry if I just yell ‘Mutatio Lauandi!’?

That’s right. I gave myself a tattoo when I was 13.

See, I told you it was a brilliant choice.

END_OF_DOCUMENT_TOKEN_TO_BE_REPLACED

I open my mouth and say ‘you’re right, your hair has looked better’.

Did those words come out of my mouth?!? OMG, I can fix this…say something better Sar “what I meant to say was, when your bangs are longer you can’t see the wrinkles in your forehead and you look years younger.” Wait what? Am I drunk? What’s happening? Make this moment stop. Sarah, stop talking, I beg of you. STOP SAYING WORDS. Think she’ll notice how much emphasis I put on the word ‘years’? Yeah Sar, that’s what she’s noticing. Idiot.

END_OF_DOCUMENT_TOKEN_TO_BE_REPLACED

A few years back while I was in the middle of making dinner for my three sweet musketeers, somehow the dog got out. I remember hearing my oldest, who was 8 at the time, yell “Momma! I win! The puppy is free’. Mark my words, that kid is going to be an animal activist.

I grab my shoes, some puppy treats and outside I go….

I could see the dog on the other side of the cul-de-sac, just frolicking around, enjoying his freedom. As I started calling out to him, my sweet entourage is following me. So as I jog to try to get the dog it starts to sound something more like…..

The neighbor lady appeared in her front lawn and seems to be just watching with a smile on her face, like she’s been here and is living vicariously through me and my moment of chaos that I am parading around the cul-de-sac. (In my head she grabbed a drink and pulled up a lawn chair, but I don’t think that REALLY happened, did it?)

END_OF_DOCUMENT_TOKEN_TO_BE_REPLACED

I mentioned yesterday that I am a fan of saving money when I can. I think it’s great. Well, mostly great. I remember one spring, about this same time of year; I decided it would be a fabulous idea to go get my legs waxed. But wait….I could totally do it myself, right? Totally.

Isn’t there some sort of wax you can make yourself?